Fightback in vain for A team

You are here: Home1 / Fightback in vain for A team

After a dramatic 5-4 victory in the reverse fixture, Wellington welcomed Wembdon to the Playing Field expecting another chaotic game. 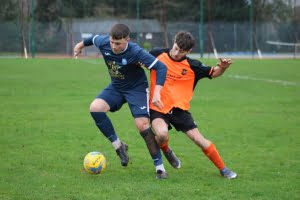 The match started evenly but Wellington rued early missed opportunities and, following this, a defensive mishap gifted the visitors the lead. Wembdon then doubled their advantage using their lethal long throw to assist a flicked on header to the back post which was bundled in.

Despite the scoreline, Wellington refused to give up against opponents who became increasingly aggressive, and they were playing the better football when they could get the ball on the floor.

Wellington were far the better side in the second half and attacking pressure led to a penalty being awarded when Tom Scarlett was manhandled to the ground before dusting himself off to reduce the deficit from the spot. Momentum was then with the home side and the deserved equaliser came through substitute Joey Conway who bravely headed in at the back post.

A draw would have been the fairest result but, in a cruel twist of fate from the reverse fixture, it would be Wembdon who would score at the death to win the game.

Again, using their physicality, a ball from a corner wasn’t cleared and turned in sparking celebrations from the away support, as had been seen at their pitch. Worst of all, the winning goal came moments after Wellington could have won it themselves had captain Oli Ghazala’s chipped shot been inches lower and not cannoned back off the crossbar.

There was much disappointment at the final whistle but the management made it clear that Wellington should take much pride from the heart and perseverance showed in a game they did not deserve to lose.