Wellington and premier leaders Bradford Town will have to meet again after their clash at a rain-soaked Playing Field was brought to a premature end. 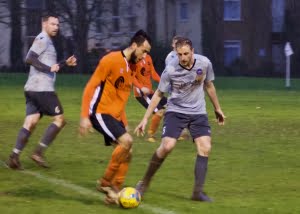 The pitch had passed two morning inspections but conditions worsened as the game wore on and referee Mr Lee Roberts abandoned proceedings with 20 minutes remaining – a decision which angered the visitors who were on their way to a comfortable victory.

Bradford took the lead in bizarre fashion after 16 minutes as a crossfield clearance by home defender Tom Stone cannoned off striker Gary Higdon outside the area and rolled agonisingly into the net.

They should have increased their lead just after the half-hour when they were awarded a penalty for a foul by Josh Pearson but keeper Tom Welch dived to his right to keep out Higdon’s spot kick.

Wellington did well to keep the score at 1-0 until the break but found themselves under the cosh in the second half as the visitors stepped up a gear playing down the slope.

Bradford doubled their lead after 50 minutes with a header by Charlie Walton and then Higdon wriggled into space to score their third – and his second – 17 minutes later.

The rain continued to pour down, making life increasingly difficult for the players, and Mr Roberts blew the final whistle after 70 minutes, then incurring the wrath of the Bradford players and officials.

Fightback in vain for A team
Scroll to top