You are here: Home1 / Valuable point from six-goal thriller

Wellington ended their run of defeats and picked up a valuable point from a ding-dong contest with Street at the Playing Field. 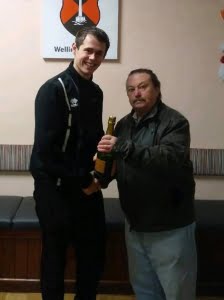 Tim Legg’s re-vamped side had been struggling for goals since he took over in mid-October but they finally found their shooting boots to climb out of the relegation zone.

There were three changes from the team comprehensively beaten at home by Shepton Mallet but there was also a more attack-minded formation with Carl Jones joining Harry Scatchard up front.

Wellington got off to their customary bright start and went ahead after nine minutes. A corner from Ian Bellinger reached central defender Jake Horsey, who did well to get to the byline before sending in a low cross which was turned home by right-back Elliot Williams.

Unfortunately, they were unable to build upon their first lead since Legg took over and, by the interval, were trailing 2-1.

Street equalised in unusual circumstances as a shot went wide after 28 minutes and, while most were expecting a goal-kick, the referee ruled their player had been impeded and pointed to the spot. Ollie Pearson converted the penalty despite a great effort from keeper Tom Welch.

The visitors then went in front three minutes before the break as they sent over a cross from the right and Harry Gardner rose unchallenged to head home.

Welch saved well from Kam Andrews early in the second half and, shortly afterwards, Wellington made it 2-2 as the ball was played forward to Scatchard, who shrugged off a challenge before producing a cool finish.

Street should have gone back in front when Gardner was sent clear down the middle but shot wide and they were punished when Wellington re-took the lead after 56 minutes.

A long throw by George Sinnott came out to Glen Wright and the skipper capped an excellent display by sending in a header which sailed into the net.

Wellington could glimpse a much-needed first win under Legg but were pegged back again after 65 minutes with a half-volley from the edge of the box by Callum Thompson.

Both sides pressed for the winner in the closing stages but the full-time whistle went with honours even.

PHOTO: Wright was named man-of-the-match and the award was presented by long-serving committee member Mike Bull.