You are here: Home1 / Table topping A team held

Wellington A hosted Bridgwater Grasshoppers at fortress Rec with the opportunity to open up a commanding lead at the top of division two. 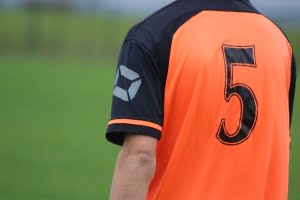 Welly were welcomed by the return of Tom Scarlett and, in the absence of Tenny Harlow, assistant manager Will Hammond stepped up to the plate with the knowledge that Grasshoppers had lost their last two games 7-0 and 4-0.

However, Welly soon realised that they were not facing an opposition playing like they’d shipped 11 goals in their last outings. A tight, narrow midfield caused problems in the middle for the Tangerine Army but Welly were able to use width to create one on one chances which should have been taken.

Welly did take the lead when Scarlett rounded the keeper. It was a lead they could not hold at half-time however as, despite Sully Harlow’s best efforts, he could not keep out a sharp volley from a Grasshoppers corner so the teams were level.

Changes were made at the break and, after strong words from a frustrated management, Welly controlled the second half but somehow managed to find themselves 2-1 down when Grasshoppers benefited from a fortunate deflection after Harlow had initially closed down an attack.

Now facing defeat, the Tangerine Army must be praised for continuing to press forward and equalised through a well-deserved goal from Jordan Sellick to end his recent drought, assisted by manager Luke O’Hara. Welly pushed for a winner but substitute Joey Conway couldn’t finish off a late opportunity.

It is testament to this side that there was much frustration at full time that a win had not been achieved. However, the team must move on and look forward to getting back to winning ways with a sharp reminder for the management that there is no easy opposition in this division.