You are here: Home1 / First team pay the penalty … twice!

Wellington remain in the relegation zone after an agonising home defeat by mid-table Westbury United. 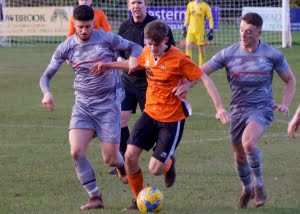 The visitors from Wiltshire had won 5-0 in the first meeting between the sides and, although Wellington showed more application in the return, they still completed the double.

Westbury started brightly and held the upper hand early on but Wellington gradually got into the game and it looked like half-time would be reached goalless until late drama before the break.

Visiting striker Sam Jordan was running away from goal when he was brought down in the box by Josh Pearson and Callum Demkiv blasted home the resulting penalty.

Both sides created openings in the second half but it was Westbury who got the all-important second goal after 66 minutes … and again it was from the penalty spot.

This time, Jake Horsey was the offender as he brought down Demkiv who picked himself up to send keeper Tom Welch the wrong way to double his tally.

That left Wellington with a mountain to climb but they reduced the arrears four minutes later when Charlie Dodd wriggled into space just outside the box and fired home a low drive past Edward Baldy.

That gave the home side a glimmer of hope and they came so close to an equaliser with ten minutes remaining. The talented Joe Wylie fired across goal and, when the ball came out to Ian Bellinger, his effort was bundled off the line by a visiting defender.

Football can be a cruel game and, just as it looked like Wellington might snatch a valuable point, Westbury broke upfield from a corner to seal their victory with a neat finish by Joe Stradling.