The recent wet weather has been playing havoc with our fixture lists.

The first team travelled to Bridport in midweek – only for the referee to call the game off shortly before kick-off having deemed the pitch (pictured below) unplayable and the match has now been re-arranged for Tuesday, January 28th, with a 7.45pm kick-off. 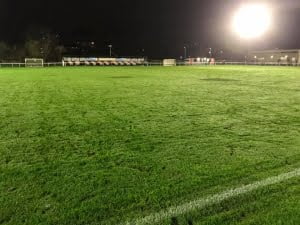 Meanwhile, our next home game in the Toolstation premier division was due to be against Hallen on Wednesday, January 15th, but this has had to be re-arranged as the visitors now have to play a cup match, which was itself postponed this week. We have arranged to entertain them at the Playing Field on Wednesday, February 5th, also with a 7.45pm kick-off.

Another fixture hit by the weather was our first-team game at home to Bradford Town on the Saturday before Christmas, which was abandoned after 70 minutes. This has now been pencilled in for Wednesday, February 19th, subject to the visitors’ cup commitments.

You can see how our fixture lists currently look by clicking below:

Depleted A team stay on top
Scroll to top