You are here: Home1 / Improved Reserves deserve a point

After their previous poor home showing against Exwick, the Reserves knew changes would be afoot and so it proved. With changes to personnel and formation, the players had to be concentrated and focused. 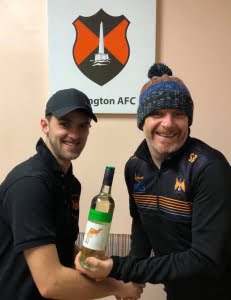 Tennessee Harlow was recalled from the A team, along with Dan Woodgate, and Robbie Broomhead was handed a deserved start as a 3-5-2 formation was implemented for the visit of high- flying Alphington.

The Christmas turkey (or nut roast) was just a distant memory … thankfully, the Ressies came out fired up and dominated the early exchanges. With the slope and wind behind them, they knew their visitors would struggle to get out of their half. Tough tackling veteran Matthew Holmes set the tempo early on with some trademark crunching challenges.

The Reserves’ high workrate was pressuring Alphington into hurried clearances – we were up for the fight, quick into challenges and visibly enjoying winning the physical battle. Chances were coming too. Liam Thorne released Oli Nott early on. As he bore down on goal and pulled the trigger an untimely bobble meant his usually reliable shooting misfired and his shot went wide.

Tireless Liam Thorne was a constant thorn in the Alphington defence and should have been awarded a penalty on 25 minutes. Harlow crossed low from the left and, as Thorne went to finish, he was unceremoniously bulldozed by the away keeper but, with no VAR available, the decision didn’t go his way.

Wellington eventually took a deserved lead on 33 minutes. The impressive Tom Davies scored with a remarkable header. A freekick high on the right was met by Davies who flicked a back header high over the keeper, leaving him no chance. A well-deserved goal, for Davies and the team.
More opportunities came Wellington’s way, but the deserved second goal just would arrive and the half ended with the Ressies one up.

The wind was still blowing strongly for the second half and Alphington took their turn to use it to their advantage. In a reversal of the first half, Wellington were now defending a lot more. Rob Hall was being called into action but kept goal well.

Alphington were having more possession and creating more but Wellington’s hard-working back three were tremendous. Davies, Fleet and Danny Nicholls embraced the battle. Counter attacking was the way forward for Welly and a second goal would have sealed it but the few clear chances that came their way were wasted or rushed.

Alphington finely got a clear chance to equalise on 71 minutes. A penalty, clear and definite, was awarded and dispatched past the hand of Hall.
There weren’t any further clearcut openings and a draw was a fair result as the final whistle blew.

All in all a very good and improved performance from their previous outing. Special mentions for young Broomhead and Nicholls who both contributed well and continue to impress, Thorne for his selfless front line running and man-of-the-match Davies who showed why he should be considered for the first team.

Depleted A team stay on top