You are here: Home1 / Vital clash ends in defeat

Wellington failed to capitalise on an impressive first half display as they lost out in their basement battle at Chipping Sodbury. 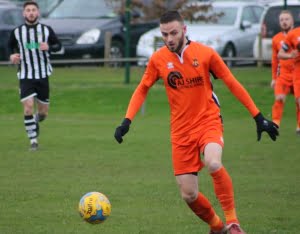 Tim Legg’s side played their best football since he took over in the opening 45 minutes only to fade after the break with the home side coming from behind to clinch the points.

Having lost central defender Tom Stone to university commitments, Legg drafted in Mike Mullen for his full debut and also introduced striker Kyle Bassett, who has started his second spell at the club having been prolific in the Devon League this season.

Both players fitted in immediately and played their part in a dominant Wellington performance up to half-time.

They took a deserved lead after 23 minutes as a flowing move ended with George Sinnott pulling the ball back for Harry Hamblin to finish clinically.

Despite going close on several occasions, that goal was all they had to show for their efforts and their inability to put the game beyond Chipping Sodbury’s reach proved crucial.

Although the visitors started the second half brightly with both Bassett and Sinnott going close, they then lost their way and found themselves pegged back in the final third of the pitch for the rest of the game.

Defender Luke Burman equalised with a low drive from 25 yards after 69 minutes and then always looked the most likely winners.

After Chipping Sodbury sub Dan Brown had hit the underside of the bar with a cracking shot, they took a 75th minute lead when a high cross came out to Jack Moore who smacked it back into the net.

They sealed the points with four minutes remaining, Brown slipping the ball through for Jack Parker to slot past keeper Tom Welch.

The only consolation for Wellington was that other results went in their favour but they know their winless run must end soon if they are to claw themselves out of trouble.

Friendly victory for A team
Scroll to top