You are here: Home1 / Local derby ends in defeat

Struggling Wellington suffered their second 2-0 defeat in four days as they went down at foggy Bridgwater Town. 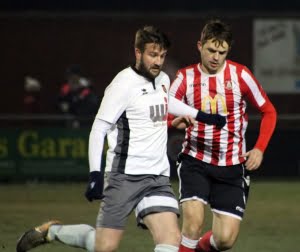 The local derby had an intriguing look on paper with both sides featuring players taking on their former club and looking to kick-start a better run of results.

So it was hardly surprising the match got off to a cagey start on a difficult surface until the home side took the lead after 16 minutes.

They worked to keep a corner alive and when the ball was swung over from the right by one of our old boys, Sam Towler, it was headed across goal by another, ex-skipper Tom Ellis, and turned home by Oscar Latas, a recent signing from Melksham Town.

From that point, Bridgwater took the game to Wellington – for whom midfielder James Clough made his first start since re-joining the club – without being able to add to their tally before the break.

It was a similar story after half-time as Wellington held firm to keep their noses in the game with boss Tim Legg throwing on all three subs including new striker Jesse Howe, signed from Devon side Exwick Villa.

But the killer blow came 15 minutes from time – and from another former Wellington player. Harry Horton played in Jack Taylor and the one-time Playing Field favourite cleverly clipped the ball over advancing keeper Tom Welch.

With the fog getting worse and the pitch becoming even more tricky, Wellington kept huffing and puffing with skipper Glen Wright working tirelessly in midfield and young Joe Wylie injecting some urgency after coming on as a sub.

But, as the final whistle blew, they could have no complaints about the end result.