You are here: Home1 / First team sunk by Vase hopefuls

A breakaway goal in each half gave highly-rated Bitton the double over Wellington at the Playing Field.

Manager Tim Legg opted for a change of formation – playing 3-5-2 with George Sinnott and Josh Champion acting as wing-backs – against a side who have reached the last 16 of the FA Vase. 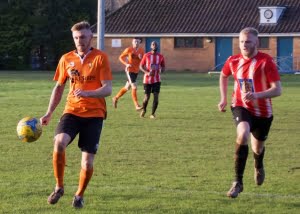 And although his team showed plenty of character, Bitton’s class meant they always looked more likely to come away with the points.

They almost went ahead after only four minutes as a cracking 25-yard drive from Ibrahima Diallo smacked against the bar with keeper Tom Welch beaten.

But they were not to be denied and took the lead ten minutes later – ironically after Wellington’s first attack. Champion saw a dangerous cross pushed over by keeper Robert Brown and the visitors broke quickly from the resulting corner. The move ended with a cross from the right being met at the far post by Harrison Kyte, whose header hit Ryan Bath as he went to ground and went into the net with Wellington appealing in vain that the final touch had been from his hand.

Wellington refused to lie down and hit the bar themselves on the half-hour from a George Sinnott free kick before striker Kyle Bassett saw a dipping shot spectacularly saved by Brown.

It remained 1-0 at the break and the next goal was always going to prove crucial. Unfortunately, it was Bitton who doubled their advantage after 67 minutes as they burst forward and a low cross was smashed into the roof of the net by Joe McClennan.

Legg threw on all three subs – including a welcome return for midfielder James Clough – but although his side huffed and puffed to get back into the game, they were unable to reduce the arrears.

The Reserves were without a game while the A team match away to Wyvern United fell victim to a waterlogged pitch. They did, however, beat Bradninch 8-2 in a friendly.

Friendly victory for A team