You are here: Home1 / Great effort from upbeat Reserves

Title-chasing Thorverton were the visitors to the Playing Field to face an upbeat Reserves. 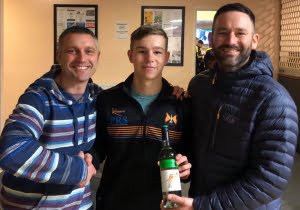 Wellington had the luxury of making only three changes to the starting 11 – a rarity this season! Teenager Wes Poulsom came in for Dan Woodgate while Josh Baker replaced first team call-up Oli Nott with Aaron Hawkings replacing the unavailable Jamie Fleet. All the other positions were unchanged from their previous match.

The continuity of a settled line up gave the home side extra confidence and they were the better side throughout the majority of the first half.
High pressing, great work rate and a desire to support each other was evident.

Chances were being created as they took the game to their high-flying opponents. Their efforts though were not being rewarded. Some ‘robust’ defending saw two early penalty appeals turned down along with some other bewildering decisions from the man in black.

Despite having the upper hand, it was Thorverton who took the lead. A misplaced header in midfield, spun past last man Hawkings and was calmly finished by the visitors’ no 9, shooting low past Rob Hall on 25 minutes.
Disappointed, but realising they were on top, the Ressies showed great character and went straight back on the front foot in search of a deserved equaliser.

Poulsom went close on 35 minutes. Some neat quick passing on the right saw the youngster find some space on the right edge of the box. His goal bound shot was very well saved, to the surprise of the large supporting crowd. The ensuing corner, perfectly delivered by the blossoming 17-year-old Robbie Broomhead was narrowly headed wide by skipper Tom Davies.

Wellington were on top and were peppering the opposition defence. Corner after corner – all brilliantly delivered by Broomhead – kept the visitors pinned in, but the equaliser wouldn’t come and half-time arrived with Thorverton scrambling for their changing room 1-0 up.

Carded Matt Holmes was replaced at the break by Darren Mace who took up the left wing-back position while Tennessee Harlow moved into central midfield and the second half continued as the first had ended.

Baker could have equalised on 49 minutes. The impressive striker wriggled free and found space and time in the box, but his powerful low shot was too close to keeper who saved well. The tireless workrate of Baker and Liam Thorne was a nightmare for the travelling defence. Baker had another penalty shout turned away on 54 minutes. The decisions and luck of the bounce were not with the Ressies, but still they pressed on.

Finally, the equaliser came in the 60th minute. Harlow collected the ball in midfield, moved inside from the right and settled before curling a left-foot 25-yarder in to top corner. An absolute screamer of a goal and thoroughly deserved.
The win now came into focus and the Ressies wanted it. So many near misses were to follow. Baker burst clear of the defence but his clipped finished past the onrushing keeper bounced the wrong side on the post. The tireless Clay Westcott’s goalbound shot was cruelly deflected wide by substitute Dan Woodgate. Baker had another chance in the 80th minute. An exquisite turn and pass by Broomhead split the visitors’ defence and left Baker in space but usually reliable striker fired high and wide … a bobble was to blame

The last ten minutes saw the game open up, but the last chance fell to Welly. Another corner delivered from the right was partly met by Davies, the ball fell in the box but Woodgate’s goalbound toe punt was cleared and final whistle blown.

The players were massively pleased with their display but equally disappointed not to have got the win they quite clearly deserved. A performance built on another solid defensive showing with some very good all-round attacking play … which just lacked the finishing touch!

Special mentions for teenagers Harlow, Broomhead, Poulsom and Nicholls who have all played well and shown great maturity in recent weeks.

PHOTO: Man of the match was Harlow who is pictured with supporters and ex-players John Norman and Dave Poulsom.