A goal after only four minutes settled the clash between two of the premier division’s strugglers in Bristol. 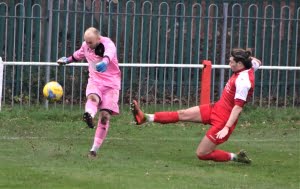 Manager Tim Legg was forced to make a number of changes because of unavailability and injury and his line-up included keeper Connor Sidley-Adams, who has re-joined the club, along with a first start for new striker Jesse Howe.

But against the side they had drawn 1-1 with in Legg’s first game as boss back in October, they made a nightmare start when a cross was sent over by George Boon and Matt Binding’s header looped into the net.

The rest of the first half was pretty awful, to be honest, and there wasn’t another effort on goal until Wellington defender Jake Horsey produced an excellent block in stoppage time.

Legg clearly had work to do to inspire his side during the interval and whatever he said certainly had an effect as the visitors took the game to Cadbury Heath for the rest of the match.

They were lucky not to fall behind shortly after the restart, Lewis Hedges shooting wide from an excellent position, but after that it was one-way traffic with Wellington in control.

The fact they were left to travel back down the M5 empty-handed was due entirely to a pair of brilliant saves from home keeper Ollie Jones.

The visitors were awarded a free-kick 25 yards out after 72 minutes and Elliott Williams’ effort took a deflection off the wall before being spectacularly pushed over by Jones.

And he came to Cadbury Heath’s rescue again three minutes from time when Wellington’s outstanding player, skipper Glen Wright, dived to head sub Ollie Nott’s cross just inside the post but the keeper produced another stunning save.

There was still time for the home side to break out in injury time but Sidley-Adams did well to prevent them doubling their lead.

A team foiled by title rivals
Scroll to top