Wellington continued their improvement with a hard-earned and valuable point against fourth-placed Hallen at the Playing Field.

They followed up their battling display away to title favourites Plymouth Parkway with another performance full of endeavour and determination. 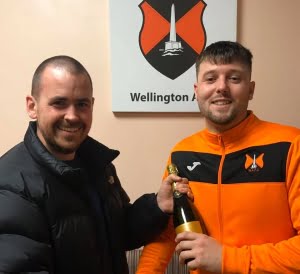 Manager Tim Legg brought in Harry Scatchard and Ian Bellinger to replace Charlie Dodd and Jack Bown-Porter but his side found themselves on the back foot in the opening exchanges.

Their cause was not helped after ten minutes when influential defender Mike Mullen limped off with a hamstring injury and was replaced by striker Jesse Howe – Carl Jones dropping back into defence.

Rather than the change hampering Wellington, it seemed to spur them into life and youngster Ollie Holman went close twice before the side, who had failed to score in their previous four matches, struck twice in five minutes.

Howe, a recent signing from Devon club Exwick Villa, bagged them both – making room for himself on the edge of the box to shoot low into the net and then, after 20 minutes, running in unchallenged to score with a header from a perfectly-flighted Bellinger corner.

Hallen, looking to move up into third, were on the ropes but gradually regained their composure and nearly pulled a goal back shortly before the break.

They were awarded a free-kick just outside the area and Kyle Thomas sent the ball heading for the top corner but keeper Tom Welch, fresh from his heroics at Plymouth, pulled off another brilliant save, turning the ball on to the bar.

The visitors had gradually been gaining in momentum and came out for the second half looking like they meant business.

Hallen pulled a goal back after 50 minutes when Thomas sent over a cross from the right and highly-rated striker Sacha Tong rose ahead of Welch to head home.

Eight minutes later it was all-square. Wellington midfielder James Clough bundled over sub Aaron Anglin in the area and Thomas smacked the resulting penalty past Welch.

That could easily have signalled a Wellington collapse but, instead, they bounced back and actually finished the game the stronger side.

They had the ball in the net twice but sub George Sinnott was ‘rewarded’ with a yellow card for deliberate handball while Dodd was thwarted because the ref had already blown for a Wellington free-kick.

The home side almost snatched the winner as, during inexplicable minutes of injury time, Sinnott was twice denied by excellent stops from keeper Liam Macfarlane.

It was another encouraging game for Legg and his coaching team, who have worked tirelessly to build a new squad after 12 players quit the club when previous boss Clive Jones left in October.

PHOTO: Howe was named man of the match and received the award from midfielder Scott Drayton who was paying a welcome visit to the club.‬

Great night ahead at the club
Scroll to top