You are here: Home1 / Rampant A team’s semi triumph

Our A team returned to Bridgwater College for their second Seward Cup semi in as many seasons and, after last year’s shootout heartbreak against FC Castlemoat, the Tangerine Army hoped to use this experience to go one better against an unknown Spartans side.

With Wellington unsure what they were facing, the message was clear; do not allow the opposition the opportunity to show how good they are.

Seconds into the game, only an unfortunate heavy touch from Jordan Sellick prevented him putting himself through on goal. This however would just be a warning for a Spartans side who would soon find themselves out-thought and out-played by a superb Wellington.

The opening goal saw Rohan Poulsom cross well for Sellick to guide his header home. While Wellington switched straight back on, Spartans began to lose their way with themselves and the officials. A sin bin for verbal abuse gave the Tangerine Army a temporary numerical advantage and this allowed the opportunity for a second goal from man-of-the-match Danny Nicholls (pictured) 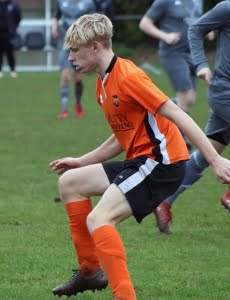 who has a fantastic future at the club.

A perfect first half for Wellington was cut short when Staplegrove were awarded a penalty shortly before break but, with the deficit reduced, the Welly management still had only positivity and encouragement to offer.

What followed was probably the most tense half the side had experienced. Staplegrove threw the kitchen sink in trying to find an equaliser but they were up against a defence which was rock solid and a goalkeeper producing unbelievable saves. Staplegrove came closest when Harlow magnificently tipped over a goalbound shot.

In addition to a strong defence, Wellington continued to show their threat of counter-attacking football. Particularly, the introduction of James Kitson to the game, a masterstroke from O’Hara and Hammond who managed the game perfectly, gave a much-needed energy boost to the side.

And, in the dying minutes, a Wellington break saw Poulsom expertly keep the ball from going out on the sideline before guiding it across to Kitson, via Chris Cannon, who calmly finished to win the game. Spartans howled that the ball had gone out but, with no VAR (!), the goal was awarded and the semi-final was settled.

This was a wonderful team performance and the side were singled out by the watching league referee and fixture secretary for their impeccable attitude and behaviour.

Wellington return to league action on Saturday but now look forward to a cup final against either Wyvern or FC Castlemoat Reserves … come on, the Tangerine Army!