It was a cruel blow for Tim Legg’s side, who had defended doggedly for 84 minutes against a side determined to move up into the Southern League. 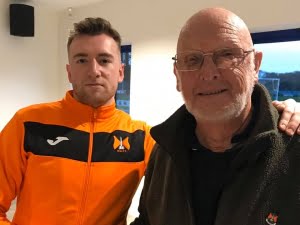 Legg rang the changes after the disappointing defeat away to fellow strugglers Cadbury Heath, including recalls for talented youngster Ollie Holman and defender Josh Pearson along with a welcome return for Jack Bown-Porter.

From the kick-off, his side looked well organised and failed to allow the highly-rated Parkway outfit a clearcut opportunity in the goalless first half.

The home side should have taken the lead in the opening minutes after the break when the ball fell to striker Adam Carter eight yards out but he dragged his shot wide when he looked odds-on to score.

After that, the game turned into the ‘Tom Welch Show’ as the Wellington keeper pulled off a succession of excellent stops to keep Parkway at bay.

But, just as Wellington’s stubborn resistance looked like it would earn a shock result, their defence was finally breached with six minutes remaining.

A goal-kick from Welch was quickly played back towards the visitors’ goal and, this time, Carter ran through to poke the ball home … the wild celebrations of the Parkway players and supporters demonstrating their relief.

Wellington will take heart from a hugely improved performance after which they could hold their heads high.

PHOTO: Welch was named man-of-the-match and is pictured with Club Secretary, Jeff Brown.