You are here: Home1 / Cracking home win for Reserves

After the disappointment of two back-to-back one-all draws, the Reserves finally got a win to validate their ongoing improvement.

Their visitors to the Playing Field were struggling Lympstone who fielded a strong, physically imposing team, playing to their strengths with some very direct football. 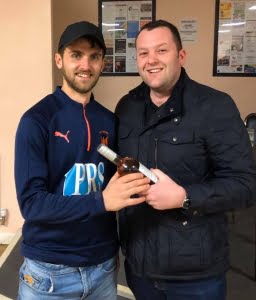 From the start Lympstone had the slight upper hand. Their long ball game pushed Wellington back, constantly asking questions of the home back three but Davies, Fleet and Nicholls equipped themselves well, embracing the challenge and standing firm.

In response, Wellington were often too rushed in possession. The pitch conditions didn’t help their quest either, but they tried to play despite their frustration and began causing problems for their visitors.

Wellington got their reward and ultimately the winner in the 14th minute. Clay Westcott received a pass from the tireless Liam Thorne. Controlling it 20 yards out, right of the ‘D’, he curled a right-footed shot away from the keeper and high into top left corner. A deserved goal for the likeable, hard-running central midfielder.

Despite going behind, Lympstone were very much in the game. Their physical advantage was always apparent and they stuck to their guns. Winning numerous corners they finally forced their best chance of the game. A corner, delivered to a crowded six-yard box was met cleanly but the reaction of young keeper Rob Hall was superb, throwing his body on the line to pull off a great save … with his face!

Wellington went on to have a couple more chances, but would end the half without adding to their lead.

Playing down the slope for the second half, Wellington knew the next goal would be crucial so keeping a clean sheet was their priority. Lympstone continued with their ranging mortar attacks, but still they couldn’t find their way past Wellington’s trenches. On the odd occasion where a chance loomed, it was quickly snuffed out or dealt with by Hall.

At the other end, Wellington created the better chances. Ollie Nott ran free, cut inside from the right but his placed shot was saved leaving Thorne frustrated, clear at the far post. Thorne was replaced (injury) on 61 minutes by Luke Woodgate.

Man of the match Tom Davies, who gave an imperious defensive display, was next to go close. He rose well at the far post from a Robbie Broomhead cross but his header was well saved.

Rejuvenated striker Woodgate went clear next – 81 minutes were on the clock as he bore down on goal, 45 yards out. As he reached the area he dispatched a low shot past the advancing keeper but his shot hit the base of the post and was cleared.

Skipper Mark Owen, returning from a lengthly lay-off, was introduced for the final eight minutes. Replacing Nott up front, it was almost the perfect return but as he broke free down the right on 89 minutes, his right footed shot failed to bulge the net.

Holmes would shoot inches wide from the edge of the box and Westcott also had a shot saved as Wellington failed to increase their lead, despite their efforts.

At the final whistle, which saw nine minutes of stoppage time, Wellington ran out deserved winners. Their effort and commitment was the key to their win with Davies unquestionably the stand-out player excellently supported by Hall, Fleet and Nicholls.

All the side gave their all and came through this immensely physical encounter with flying colours.

A team foiled by title rivals