A team return to the top of table

You are here: Home1 / A team return to the top of table

Wellington A faced Bridgwater Grasshoppers with the opportunity to take advantage of teams around them either playing each other or not playing at all – so much so that a win would take the Tangerine Army back to the top of the division. 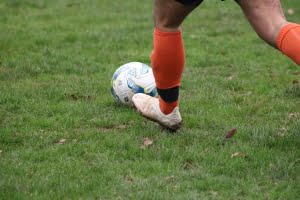 In Grasshoppers, Wellington faced tricky opponents with whom they had shared a frustrating 2-2 draw in the reverse fixture. Opening exchanges lacked quality as both sides tried to seize the initiative on a bobbling pitch. However, Wellington grabbed the opener when Tyler Fyfe’s through pass released Jordan Sellick who worked the ball across to Tom Scarlett, via James Kitson, to fire home. In a pivotal moment in the match, Kitson was then hacked down in the penalty area moments before the break and Scarlett stepped up to give the Tangerines a 2-0 lead at half-time.

From the beginning of the second half, Wellington continued to create opportunities to give them a more comfortable lead. Woodwork was struck and the Grasshoppers keeper worked hard before Jordan Sellick finally found Wellington’s third with a second headed goal in as many games.

Grasshoppers, however, continued to be a threat on the counter and, soon after, broke away before Nigel Letten stopped the attack by conceding a penalty. This did not change the pattern of the game though and Letten redeemed himself by winning the ball twice before setting up Wellington on an attack which would result in supersub Joey Conway finishing well to restore a comfortable lead. Wellington could have had more and came closest to a fifth when Letten headed just over from a late corner.

However, the Tangerine Army return home happy with an important victory and much improved performance against their opponents. Better news came from Taunton with third and fourth placed Wembdon and Wyvern taking points off each other in a 3-3 draw. With Bridgwater Sports not playing, Wellington returned to top of the division and are seven points clear of third placed Wembdon.

Wellington continue league action at home to Porlock on Saturday.

Great night ahead at the club