Wellington were extremely unlucky to only come away with a point after another fine team performance.

Playing on the infamous sloping Chard pitch, Wellington arrived in good form and knew they would be tested by an in-form Chard side. With three of the previous week’s starting line-up unavailable, a reshuffle was needed. Wellington reverted to a 4-3-3 formation. Skipper Mark Owen returned to the heart of defence, Ash Saunders came back into left forward, Josh Baker started through middle.

Playing down the slope for the first 45, Wellington resisted the temptation of a long ball game, instead playing some neat quick one-touch football. The back four platform was again looking very solid which allowed the midfield trio of Broomhead, Nott and Fleet to play through their opposition at regular intervals.

The chances would soon come and the first fell to Baker, racing clear from a Nott through ball, only to see his curled right footed finish roll agonisingly wide of the post. Next would see Saunders released by Davies but alas it was the same outcome as he saw his left footed shot fly high and wide. 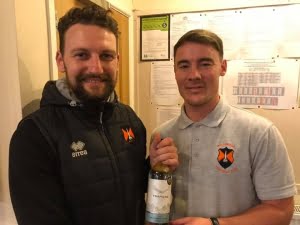 The lively Liam Thorne would be next. He perfectly met a knock-down from yet another great Broomhead corner eight yards out. His sweet first-time right-footed volley was superbly saved. Ex-Wellington custodian, Stuart Parris rolled back the years in the Chard goal as his outstretched hand somehow clawed Thorne’s shot wide. Yet more chances would come Wellingtons way though. Their tireless desire to close down their opposition was excellent, limiting Chard to very few, if any clearcut chances.

Next up was Davies. Mace crossed from the left and it was met powerfully from the inform defender. His flying header though was straight at a relieved Parris. Oli Nott was next up. A great bit of interplay with Baker saw him break into the box, only for his goalbound shot to hit the back of Thorne and go wide.

The half ended scoreless, with the home side only too pleased to get back to the safety of their changing room. Frustrated, the Ressies knew the game was their’s for the taking. They also knew the second half would likely mean more defending as the home side would look to take advantage of the slope. For the first ten minutes, this proved to be the case as Chard came out fired up and tested Wellington with some typically direct football but, like the previous week, Wellington stuck to their guns and defended resolutely.

The opening goal came in the 66th minute. Nott collect the ball in the centre circle and drove forward. As the defence backed off he took the chance of a right footed shot. His low, slightly pulled shot went inch perfectly into the bottom right corner, leaving Parris completely flat-footed for a deserved lead.

In response, Chard threw men forward and disappointingly threw themselves into some bad tackles. Broomhead was first to get a boot in the knee, followed by Baker getting unceremoniously pulled down. It appeared to be their only way back into the game. But the Ressies are made of stern material these days and refused to buckle always supporting each other.

On 82 minutes their roughhousing went too far. A terrible knee-high tackle on Owen left him crumpled on the floor. After a couple minutes of chest pumping and hand bags the referee rightly dismissed the offender while Davies received a yellow for his defence of the floored skipper.

The ten men of Chard threw on their big subs and pushed their ‘large’ centre back up front. Wellington lost their cool for remaining minutes, allowing themselves to be dragged down to Chard’s standard and losing their shape. Three minutes later it was all square. A long, long ball into the box saw keeper Hall flat-footed. The indecision let the Chard striker in and lift the ball over him as he stood stranded.

Wellington would have one last chance but as Baker broke clear in to the Chard box, Parris was quick off his line to meet him and brilliantly smoother his shot – a lesson the promising young Wellington keeper should take note from.

The game ended with some more Chard jostling but it was dealt with well by the man in middle.

Frustrated and feeling like they’d just lost, Wellington knew their lack of focus and composure in the face of provocation had let their opposition back into the game. But, other than that, their performance and commitment to work and support each other was excellent.

Saturday sees them home to title favourites Winchester, who have only lost once this season. Kick-off is 3pm.

PHOTO: Ollie Nott was named man of the match and the award was presented by first team manager Tim Legg.

A team return to the top of table