You are here: Home1 / Devon visitors take the points

Wellington failed to build on a pair of encouraging performances as a goal in each half consigned them to defeat by Buckland at the Playing Field. 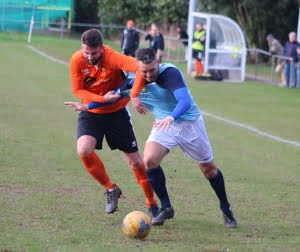 Manager Tim Legg was forced into two changes from the midweek draw against fourth-placed Hallen with defender Mike Mullen ruled out by injury while talented youngster Ollie Holman was on county duty for Devon U18s.

But that was as good as it got in the first half as the Devon side took a grip on the game and always looked more dangerous. Tom Welch was again on top form in the Wellington goal but it was one of his own team-mates who beat him after 40 minutes, Harry Scatchard turning a low cross into the net for an own goal.

Legg introduced himself as a sub at the break but it was Welch who kept his side in the game straight from the re-start, his outstretched leg denying Nathan Cooper shortly after the restart.

The second half was a scrappy affair with Buckland – who had a mix of talented youngsters and decent experience – always holding the upper hand.

Wellington finished with a flourish and finally looked dangerous in the dying minutes with Carl Jones shooting straight at Griffiths from close range and then Sinnott blasting wide from a difficult angle.

And the visitors had the final say with the last kick of the game, Cooper turning home a cross from the right to seal the points.

A team beat Porlock AND Storm Dennis!
Scroll to top