You are here: Home1 / A team beat Porlock AND Storm Dennis!

Wellington knew how important it was to get this game on, a win putting them four clear at the top and putting pressure on the other teams bidding for the title. 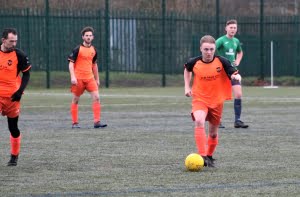 With Storm Dennis producing winds of up to 50mph it truly could have been a terrible spectacle but, knowing how treacherous the conditions were, both teams kept the ball on the floor and tried to play football, making it an enjoyable game to watch.

Welly started the game kicking against the wind so were always going to be up against it in the first half. A couple of good interceptions by the defence and very steady hands from 16-year-old man-of-the-match Sullivan Harlow kept it at 0-0 early on.

Welly were having the majority of the ball and were soon in the lead. Tom Scarlett slid in Rohan Poulsom who rounded the keeper and tapped the ball home. Porlock went straight back at their opponents but a foul on the edge of the Welly box turned the play around. Welly played it out from the back, the ball finding Brad Holmans in a forward central position. He slotted Scarlett through and, just like Poulsom five minutes earlier, he rounded the keeper and tapped the ball into the net, although it took an age to go in.

Porlock’s physical presence was soon again causing Welly a few issues but a fantastic block by Tom Davies kept it at 2-0. From the resulting corner, Porlock hit the bar direct from the kick with Storm Dennis trying to get himself on the scoresheet. 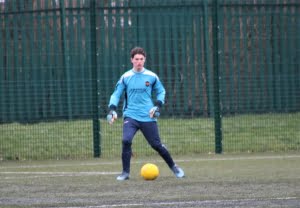 Welly went in at half-time knowing the hard work had been done and, as sometimes happens, the second half went quiet with Porlock getting more control of the ball in midfield and passing it around well.

However, they never really troubled Harlow in the Welly goal apart from one clever bit of play by Porlock’s no9 who turned the defence on a six pence and shot straight down Harlow’s throat and the keeper tipped it over the bar.

With 20 minutes to play Welly made five changes. It was soon 3-0 after that as the returning Jordon Mace cleverly turned the defence inside out and chipped the keeper, showing glimpses of why he was rightly in and around the first team before his injuries.

With five minutes to play and the game seemingly won, Welly rang a few more changes using the roll-on roll-off system to keep everyone warm and interested. As the subs were made, Poulsom came back on for a corner which he took and Davies headed home to make it 4-0.

Four was the number of the day as Welly A now go four clear at the top of the league. A massive well done, thank you and respect to Porlock for travelling in the treacherous conditions and to the ref for allowing the game to go ahead and using common sense throughout.