You are here: Home1 / Double strike leads to defeat

Wellington gave another battling display with no reward as a goal in each half saw Exmouth take all three points on the blustery Devon coast. 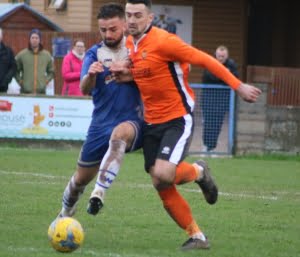 As in their recent visit to title-chasing Plymouth Parkway, Tim Legg’s side were still in the contest until the dying minutes with only an injury-time goal putting the issue beyond doubt.

Legg sprang a surprise before kick-off as his starting line-up included a return for the talented Josh Wadham, who left the club during the summer to play Southern League football at Bideford before then linking up with ex-Wellington boss Clive Jones at Cullompton Rangers.

Exmouth, who have returned to the Toolstation League this season, took the game to the visitors from the start but, on a difficult surface, they failed to penetrate a stubborn defence until midway through the first half.

A corner was floated over from the left and Jamie Dirrane rose to give keeper Tom Welch no chance with a powerful header.

It was a similar story after the break with Welch, who is having an outstanding season, pulling off a hat-trick of fine saves to keep his side in the game. 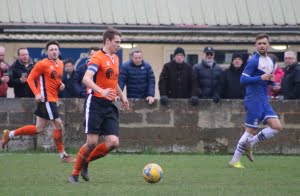 Jordan Harris was denied when clear through and then again when a wicked deflection left him unmarked in front of goal while David Rowe was also thwarted as he seemed certain to score Exmouth’s second.

Wellington rallied as they went in search of an equaliser and sub Kirk Poulsom had a scrambled “goal” disallowed for a foul on the keeper before striker Jesse Howe saw a dangerous run into the box ended by some resolute defending.

And despite having a player sin-binned in the closing stages, it was Exmouth who had the final say as the ball was played through for sub Ben Steer to clip it past Welch’s despairing dive.

Home fixtures for both the Reserves and A team fell victim to waterlogged pitches on the Playing Field.

Promotion hopes given a boost
Scroll to top