Promotion hopes given a boost

You are here: Home1 / Promotion hopes given a boost

Wellington once again returned to the artificial surface at Bridgwater Academy – a pitch which is becoming increasingly beneficial to the Tangerine Army in the current climate of downpours and floods – to try and extend their lead at the top of the division against a tricky Middlezoy Athletic. 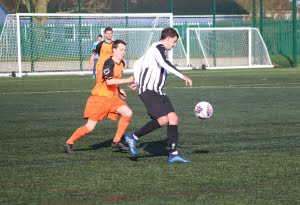 The reverse fixture had finished 5-1 to Wellington, but Middlezoy have shown a lot of improvement in squad depth and results since then, and both sides were competitive in a first half which saw football played in blue skies and hail storms!

Wellington bossed possession and territory but it was a defensive mistake which created the opener. In an unpredictable wind, a header aimed back to the keeper was seized on by Rohan Poulsom who had the composure to finish calmly. 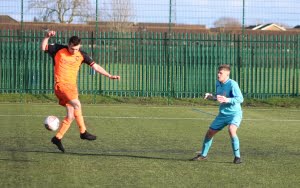 Wellington took this slim lead into the break and made the perfect start to the second period when a throw-in from the right somehow managed to travel all the way through to left back Danny Nicholls who fired past a helpless goalkeeper.

In previous games against other opposition, Wellington would have then run off with the contest. But, in credit of the opposition, Middlezoy kept coming and caused alarm bells to ring when they reduced the deficit with 15 minutes to play.

This caused momentum to shift and the points would have been shared had it not been for player manager Luke O’Hara’s goal line clearance from a late corner; remarkably the second time this season O’Hara has saved victory for the Tangerine Army in this way.

On reflection, this was a fantastic result and a battling performance from Wellington. It also further enhanced the Tangerine Army’s charge for promotion, helped by second place Bridgwater Sports defeating third place Wyvern, meaning the gap from first to third extends to nine points.

Wellington have now played more games than their title challengers but have not been given a fixture next weekend.

On yet another weather-affected weekend both the first team and reserve team matches were postponed.

Bad day at the seaside
Scroll to top