Late goal is a heart breaker

You are here: Home1 / Late goal is a heart breaker

After a battling performance, Wellington were denied a point they deserved on the day by a goal from opposing skipper Lewis Scott in the 94th minute. 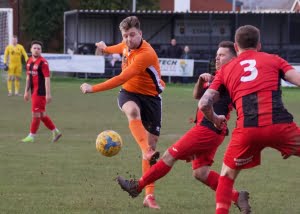 With several of the First Team squad missing and Manager Tim Legg in South Africa, Assistant Manager Alex Pope reorganised his team, moving skipper Glen Wright into the centre of the defence alongside Tom Davies, making his first appearance in the senior team.

The pair, along with the rest of the defence did a magnificent job in restricting the opposition. Unfortunately, despite good periods of possession and opportunities Wellington were unable to find the net themselves.

They started brightly and both Josh Wadham and Jesse Howe had shooting opportunities but were unable to find the target.

After 25 minutes, the lively Ollie Holman set up recalled Luke Boyle whose shot towards the top corner was saved with relative ease by keeper Ben Payter. Shortly after, Holman had to leave the field with a previously sustained shoulder injury following a tumble and was replaced by George Sinnott.

Within minutes he was set up coming in from the left by Wadham but his fierce shot narrowly missed the far post.

A few minutes later, James Clough was brought down on the corner of the penalty box and Sinnott’s free-kick curled just wide of the target.

Brislington mounted a few attacks of their own and Reeko Best turned and hit a crisp shot that Wellington keeper Tom Welch, who had another fine game in goal, did well to save at the foot of the post before George Box headed straight at Welch from a good position.

The second half saw Brislington, playing down the slope, come into the game more and Box shot wide after a quick break before Welch had to dive courageously to beat Best to a through ball.

Welch then raced out of his area to head clear but was left stranded as the ball fell to Lewis Fillington but his effort went well wide.

Skipper Wright burst forward for Wellington and fed Sinnott, then continued his run in the box but had to stretch to meet the return ball and was unable to get a good contact.

Shortly after Ollie Nott replaced Kirk Poulsom with Howe moving forward. Wellington enjoyed a period of possession and both Boyle and Howe were just off target with shots while, at the other end, Niekell Pillinger tested Welch with a fierce free-kick which he did well to save at the foot of the post.

With the game already in added time, Wellington lost possession and conceded a free-kick from which the ball was crossed to the edge of the box where Scott was able to rise and send a looping header over Welch into the far corner.

Bad day at the seaside

Defeat in Devon by new leaders
Scroll to top