Defeat in Devon by new leaders

You are here: Home1 / Defeat in Devon by new leaders

Two goals in each half gave Tavistock a revenge victory over Wellington and took the Toolstation newcomers to the top of the premier table for the first time.

Wellington had beaten the Devon club 3-1 at the Playing Field back in October but could have few complaints about the result on their first league visit to Langsford Park. 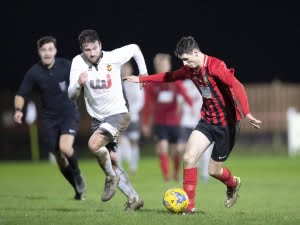 Assistant manager Alex Boyle was in charge of the side again – with boss Tim Legg still away working in South Africa – and he made three changes to the side beaten by Brislington, giving starts to Mike Mullen, George Sinnott and Harry Scatchard.

The visitors got off to a bright start as defender Mullen brought a smart save out of keeper Tom Watson inside the first minute.

Tavistock created a couple of early openings but Wellington held their own until falling behind on the half-hour with a goal out of nowhere – a through ball sending Jack Crago racing clear to produce a clinical finish. 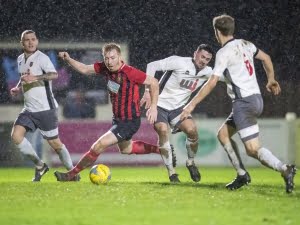 The home side always looked menacing in attack with their pace causing problems throughout and, ten minutes later, Crago sprang the offside trap again before clipping the ball over keeper Tom Welch and knocking it into the empty net.

That left Wellington a mountain to climb and it was more of the same after the break as they found themselves pegged back.

However, Tavistock’s finishing let them down and they had to rely on two penalties to seal the points – Crago completing his hat-trick on 58 minutes and Josh Grant making it 4-0 three minutes from time.

In between, Wellington’s Luke Boyle and Josh Champion were both denied by Watson as, to their credit, the visitors refused to lie down.

Late goal is a heart breaker

Lively Reserves held to a draw
Scroll to top