You are here: Home1 / Season declared null and void

Following widescale discussions throughout the week, it has now been agreed that the 2020-21 season should be declared null and void at our level with no promotion or relegation.

The decision means that, next season, the first team will again be playing in the premier division of the Toolstation League – the full statement from the league can be found below.

The club’s Annual Dinner and the league’s Convention Weekend, both scheduled for May, have been postponed.

The season may be over but let’s not forget everyone involved in Wellington AFC – and all clubs like ours – for their hard work, support and commitment during the past months … both on and off the pitch. 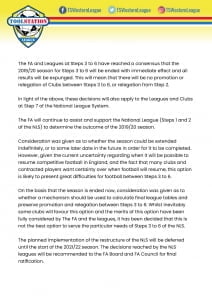 Latest position from the TS League

New boss for our Under 18s
Scroll to top