You are here: Home1 / First team unbeaten in friendlies

Our first team completed an unbeaten programme of five pre-season friendlies with an entertaining draw on the North Devon coast. 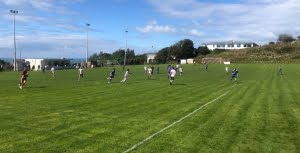 Wellington were missing a number of their new-look squad including injured skipper Glen Wright and both goalkeepers with midfielder Miles Quick, a summer recruit from Bishops Lydeard, taking over between the sticks.

He proved a more than adequate stand-in in the opening quarter of the game, bringing off a string of decent saves as Ilfracombe, from the SW Peninsular Premier East, started more brightly.

Wellington found their rhythm as the first half progressed and defender Tom Davies lifted the ball over the bar from a corner before Jamie Vaughan-Ryall was sent racing clear only to be denied by the home keeper.

In the opening minutes of the second half, Harry Walford burst away down the left but was also thwarted by a sharp save.

Although there was plenty of honest endeavour by both sides, neither was able to find the breakthrough and a draw was a fair result.

All eyes now turn to Tuesday night as we start the season with an Emirates FA Cup extra-preliminary round tie at ‘home’ to Bodmin Town from the SW Peninsular Premier West (ko 7.45pm).

Although we have been drawn at home, the Playing Field floodlights will not be back up in time and so the game has been switched to Cullompton Rangers, to whom we are very grateful.

Positives to take from defeat by champs
Scroll to top