Positives to take from defeat by champs

You are here: Home1 / Positives to take from defeat by champs

For their third pre-season friendly, our Reserves travelled to North Devon to play Park United. 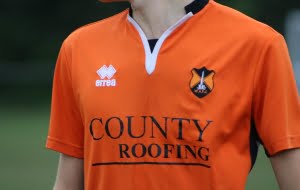 Wellington knew they would be in for their sternest test yet, against a strong and confident opposition as United are the current North Devon Premier champions, a title they have held for the past four seasons.

In beautiful weather, the home side were soon on top. High energy, good movement and quality all over the pitch meant Wellington were chasing hard for scraps early on.

It was no surprise when Park took the lead, sadly from a poor Wellington back pass. One became two soon after but, despite being outclassed on the ball, Wellington were still fighting on and trying to find their rhythm.

There were promising signs as they showed fleeting glimpses of the quick passing football they know they can produce.

It was this character and endeavour which produced a fine passing move which resulted in Liam Thorne being chopped in the box. Rohan Poulsom despatched the spot kick to cut the deficit to 2-1. However, despite renewed enthusiasm, Park would go on to extend their lead to 4-1 at half time.

Not too concerned with the scoreline, Buttle and Darch changed formation and personnel at half time, pairing loan striker Josh Baker with Poulsom and opting for wing backs in 3-5-2 shape and it worked a treat.

Wellington would go on to win the second half 2-1 and, with a bit more luck, would have narrowed the overall gap further. Logan Sellick made a good impact to the game, his strong direct running causing problems as was Wes Poulsom on the opposite flank.

The back three of Fleet, Foster and Owen gave extra solidity to the side and they were well supported by Rob Hall between the sticks, who put in one of his best performances for sometime.

Baker (near post finish) and Matt Holmes (penalty) were the other scorers. With a bit more luck Wellington could have reduced the deficit further but, all in all, Park were good value for their win.

Wellington will take a lot of positives from this game – commitment, endeavour and unity all very evident in this maturing side

Next Saturday, Wellington travel to Hemyock for their penultimate friendly (ko 2.30pm) and spectators are very welcome.

Coaching sessions for ages three to six
Scroll to top