You are here: Home1 / Penalty shootout defeat in FA Cup

In our first competitive game of the season, Wellington suffered a heartbreaking FA Cup defeat at the hands of their Cornish visitors. 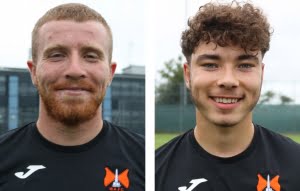 Our starting 11 featured no fewer than seven new signings with the tie played at Cullompton Rangers because the Playing Field floodlights could not be erected in time following the end of the cricket season last weekend.

And we got off to a flying start with two goals in the opening nine minutes – a lead we were to hold until almost the final whistle.

Wellington went ahead after only three minutes when winger George Sinnott played the ball inside to Miles Quick (pictured left) and the midfielder – captain in the absence of the injured Glen Wright – skipped past a defender before shooting across goal and low into the net.

The lead was almost doubled three minutes later as a slick passing move ended with a shot from striker Jesse Howe smacking against the post.

But we were not to be denied and, with the game not ten minutes old, made it 2-0. Sinnott and Howe combined well and Sinnott’s low cross found Mason Raymond (pictured right), who made room for himself before driving home.

Bodmin, tipped by many to win the SW Peninsular Premier West title this season, picked themselves up from their disastrous start and went on to boss the rest of the half without being able to reduce the deficit.

The closest they came was after 17 minutes as a corner reached Jordan Trott at the far post and he crashed in a shot which keeper Chandler Hallett did brilliantly to push on to the underside of the bar and down with appeals that the ball had crossed the line turned away.

The visitors hit the woodwork again ten minutes from the break as a long free-kick from wide out by Callum Martindale sailed over everyone to strike the bar.

However, many felt they were also lucky to go into half-time with 11 men as Quick was the victim of a two-footed lunge with the offender escaping with a yellow card.

Bodmin continued to hold the upper hand in the second half without creating any clearcut chances until the most dramatic of finales.

There were only three minutes remaining when Wellington conceded a free kick out on the right and Martin Watts gave Hallett no chance with an absolute rocket.

That looked like it was going to prove a consolation goal until the final minute of normal time.

Bodmin drove in a low cross and the ball cannoned off Tim Legg and into the net for the equaliser – a cruel blow for the player-manager, who had performed magnificently in the heart of defence.

With no extra-time or replays in the season’s competition, the game moved straight to penalties.

And, although Hallett kept out one of the Bodmin spot kicks, Howe and Raymond both lifted the ball over the bar to complete a remarkable turnaround.

Wellington must now pick themselves up for the start of the Toolstation Premier season with a trip to Cadbury Heath on Saturday.

League campaign off to losing start
Scroll to top