League campaign off to losing start

You are here: Home1 / League campaign off to losing start

WELLINGTON’S 2020-21 league campaign finally got under way in Bristol but it was a start they will want to forget in a hurry. 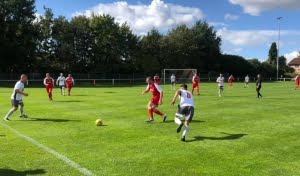 Tim Legg’s new-look squad had suffered a cruel FA Cup defeat by Bodmin Town in their opening game yet, this time, they could have no complaints about the outcome.

There was little sign of the goals deluge ahead as the game got off to a cagey opening with both sides passing the ball around well on a pristine surface.

But, once Cadbury Heath got their noses in front, they did not look back with three goals in the first half and four more after the break.

A misplaced Wellington pass saw Jake Thomas give them a 17th minute lead as he rounded Welch to net from a narrow angle and they trebled the advantage when Ben Brooks knocked home a long throw which had been flicked on and then Thomas fired in his second.

The visitors pulled a goal back with five minutes before half-time after they were awarded a penalty for a push on Jesse Howe and the striker picked himself up to score off the inside of the post.

If that offered Wellington hope of a second-half fightback, their bubble was burst with three goals in seven disastrous minutes.

A slick move ended with Brooks racing through to beat Welch and he then completed his hat-trick after another mistake before Luke Bryan drove home number six.

That put the result beyond doubt although, to their credit, Wellington refused to lie down and pulled two goals back near the end.

Sub Jamie Vaughan-Ryall dived to head home a Miles Quick cross with ten minutes remaining and then Quick was the provider again five minutes later with a corner which was headed home by his twin brother Jason.

There was still time for Cadbury Heath to have the final say with another header,  a corner converted by defender Loui Ward.

Opening time and lighting up time!
Scroll to top