WELLINGTON bounced back from their disastrous start to the league season with a hugely-improved display at Shepton Mallet. 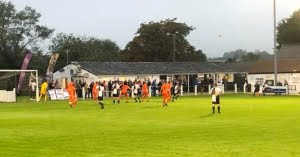 Manager Tim Legg rang the changes after his side shipped seven goals at Cadbury Heath including dropping himself to the bench so he could concentrate on coaching the side.

He also welcomed back central defender Jordan Casey and midfielder James Clough, who were both outstanding in a wholehearted performance by the entire team.

Playing up the slope, Shepton had been better openings early on although Wellington almost went ahead from their first chance after 22 minutes when the ball was presented to Jesse Howe in a good position but he skied his shot.

It remained goalless until half-time and, after the break, it was the visitors’ turn to look more dangerous. 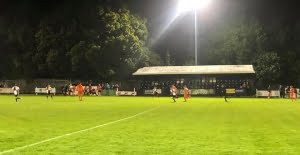 Jason Quick saw a fierce free-kick cannon back off the keeper with the rebound put over the bar by Clough, who then volleyed across goal with no-one able to get the vital touch.

Shortly afterwards, Harry Walford had a teasing cross hooked away by a defender before Mason Raymond shot just wide.

At the other end, Shepton came closest to breaking the deadlock seven minutes from time as a cross from the right was met with a powerful header which keeper Chandler Hallett pushed up on to the underside of the bar.

The home side were reduced to ten men for the closing minutes with a defender sin-binned for his comments to the officials and, although Wellington had a penalty appeal for handball turned down, they couldn’t make the advantage count.

A draw was probably the right result from an entertaining encounter between two sides who both tried to play football without being able to produce the final finish.

Opening time and lighting up time!

Another draw on our premier travels
Scroll to top