Another draw on our premier travels

You are here: Home1 / Another draw on our premier travels

Our first team collected their second successive away point with another gutsy display at Bradford Town.

After a disastrous 7-3 defeat by Cadbury Heath in their opening league game, Tim Legg’s new-look squad have re-grouped and are now showing encouraging signs for the rest of the season. 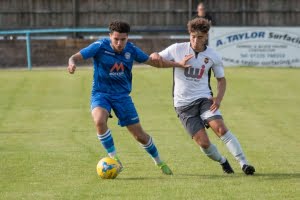 Kick-off in Wiltshire was delayed by 30 minutes after Wellington and the match officials were delayed by a motorway accident but that didn’t stop the game getting off to an action-packed start.

Bradford hit the bar inside the first minute and then took the lead shortly afterwards with a huge slice of luck.

The ball was driven low into the visitors’ box and a clearance smashed into Mason Raymond’s face and back past helpless keeper Chandler Hallett for the most unfortunate of own goals.

However, it was Wellington who then got lucky with their equaliser after 16 minutes as their first corner was played up into the air and goalwards where Bradford keeper Marko Radovanovic spilled the over his own line.

Bradford hit the bar again while, at the other end, Raymond and Miles Quick drove wide of the target as it finished level at the break.

Both sides pressed for the winner in the second half with the home side seeing a ‘goal’ disallowed for offside and Radovanovic making amends for his earlier blunder with a fine save from Jesse Howe’s free-kick.

As at Shepton Mallet the previous Tuesday, a draw was the fair result and Wellington can now look forward to their first home league game with a tasty local derby against Bridgwater Town on Wednesday (7.45).

Sadness at loss of a club legend
Scroll to top