You are here: Home1 / Injury mars first win of season

Wellington finally picked up their first win in nearly a year – along with three hard-earned points – away to fellow strugglers Hallen.

But their celebrations were tempered by a serious injury to young midfielder Harry Walford (pictured), who suffered a broken leg in a second-half challenge which saw a home player sent off. 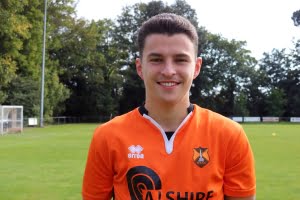 The win has been a long time coming for manager Tim Legg, who was left with a huge challenge on taking over last October as a dozen players joined previous boss Clive Jones in leaving the club.

He had to rapidly pull together a new squad, which struggled until last season’s premature end in March, and has worked tirelessly since then to bring in more players to improve their fortunes.

With central defender Jordan Casey unavailable, Legg included himself in the starting 11 and he played a part as Wellington got off to a remarkable start by scoring after only 32 seconds.

He played a perfect ball up the line to Josh Champion and the full-back beat a defender before sending in a low cross which was met at full-speed by George Sinnott, who smashed the ball into the top corner.

Hallen’s response was immediate with Corey Simpson missing a great chance as they went on to boss the first half but were unable to equalise thanks to a combination of poor finishing and an outstanding display by keeper Tom Welch.

Jordan Ricketts raced clear shortly after the break, only to be denied by Welch, before a nasty-looking challenge by Luke Hall Cousins left Walford writhing in agony and the defender receiving a red card.

The game was held up for eight minutes as Walford was stretchered off and subsequently taken to hospital where he was found to have sustained a broken tibia which is likely to keep him out of action for several months.

Despite being a man down, Hallen still looked dangerous and they drew level after 70 minutes when they carved open the Wellington defence and striker Sacha Tong slid in equalise.

It looked like both sides would be continuing their winless start to the season until Wellington struck a superb winner with seven minutes of normal time remaining.

Legg played the ball forward to slipper Miles Quick who, despite carrying a calf injury, embarked on a mazy run from midfield which took him past a couple of defenders before he drilled a low shot inside the post.

Both sides went close during the lengthy injury time but it was Wellington who secured a much-needed victory.

Stylish Reserves make it three out of three