You are here: Home1 / Reserves return with five-goal salvo

Our Reserves finally returned to football after an extended six week break with a convincing 5-1 home win although the result wasn’t as straightforward as would appear. 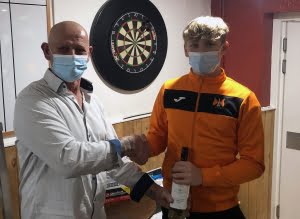 After such a long layoff and only two training sessions, it was not surprising that the lads struggled to click back into their post-lockdown form.

Both teams were full of endeavour throughout the opening exchanges and although Wellington had the lion’s share of the ball, their decision making and application were not on point. Too many long balls and a lack of composure were causing frustration throughout the side.

Wes Poulsom was replaced by Logan Sellick after only 23 minutes, the youngster sustaining a groin injury, and Wellington did take the lead in the 30th minute through Oliver Nott. After finally moving the ball with a bit more conviction, Matt Holmes fed Nott as he burst through the middle from deep. Nott allowed the ball to bounce, before perfectly lobbing the onrushing keeper for the lead. Tedburn hit the outside of the post towards the end of the half but Wellington kept it 1-0 at the break.

Aaron Hawkings replaced Brad Holmans at the interval and the second half started a lot brighter … and would end even brighter as the tireless Josh Baker doubled the home side’s advantage on 49 minutes. Great movement and a superb pass from Sellick released Baker through the middle. He calmly rounded the keeper on the edge of the box before finishing into an empty net.

Rohan Poulsom replaced Liam Thorne on 55 minutes and things took an uncomfortable turn when Tedburn pulled one back in the 62nd minute. A typical long ball attack from the right found its way to feet of the travelling striker who gave Rob Hall no chance from eight yards out.

It was a good wake-up call and for the home side who responded well to the setback. Wellington were straight back on the front foot and were causing problems and stretching the travelling defence at regular intervals. Baker broke clear down the right, the keeper came a long way and completely mis-timed his challenge and flattened the speedy striker. After a long deliberation a yellow card was awarded to a very fortunate keeper. Hawkings saw a powerful header cleared off the line and Baker went close but the final ten minutes saw them put their opponents to the sword.

Wellington pressed hard for the killer third goal and it came in the 85th minute through Poulsom as a neat one-two with Baker left Poulsom to finish neatly from close range. Three minutes later it was all over for Tedburn. After some sustained pressure and near misses, Luke Perry rose highest to brilliantly head home a Nott cross. In the closing stages Perry made it 5-1, good work from Poulsom eventually leading to Perry getting his second headed goal of the day, heading home from close range.

The Reserves would like to thank Alan and Brett Perry of Ecoprotex for sponsoring the match ball and also the home supporters who again came out in their numbers to cheer on this exciting group of home-grown players. The squad and management really appreciated your noise!

Man-of-the-match was Danny Nicholls and it was presented by Mark from the Barley Mow, who put on a meal for the lads after the game.