A team return to action with draw

You are here: Home1 / A team return to action with draw

Our A team returned to action with their first group match in the Taunton Saturday League’s COVID Cup competition. 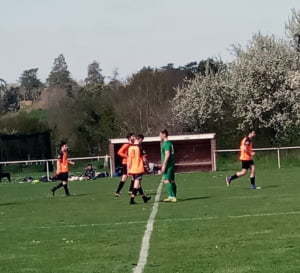 After a scrappy start to the game, Wellington won a free kick and Oli Ghazala crossed low for Jordan Sellick to knock the ball into the top corner.

Wellington won the ball back from the kick off and Tom Scarlett chipped the keeper but the ball bounced off the bar.

Then a Darren Mace long ball saw Aaron Merry clear through and he lifted the ball over the keeper but over the bar … a great first 20 minutes from Welling.

North Curry were growing into the game and a long ball over the top resulted in a foul in the area and the penalty was calmly converted for the equaliser.

Half time came around and Wellington made five pre-planned changes to give everyone a fair runout for this first game.

The second half was a very even affair and, in the first 20 minutes, neither side really created much in front of goal before Wellington regained the lead.  A quickly taken throw in on the left by Luke O’Hara found man-of-the-match Lloyd Manning who slipped it across the box for Merry to slide in to make it 2-1.

North Curry then stepped up again and pressed Wellington, eventually resulting in their second penalty of the game and another tidy finish from the Curry defender from the spot made it 2-2.

Curry pushed for a winner but, with less than two minutes on the clock, O’Hara found space on the right to slide the ball across the goal for the o rushing Aaron Merry to slide in and put the ball inches wide.

Overall a good game of football and a fair result for both sides.

Another draw for A team in COVID Cup
Scroll to top