Another draw for A team in COVID Cup

You are here: Home1 / Another draw for A team in COVID Cup

Another game, another draw for our A team in the Taunton Saturday League’s end-of-season competition with a scrappy game against a physical Redgate team. 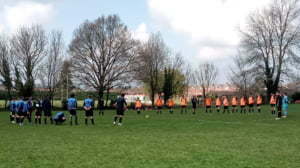 Neither side created many chances in the first half although Redgate took the lead halfway through, snatching possession high up the field to slot the ball past keeper Jared Holder.

Just like the week before five pre-planned subs were made at half-time to give everyone minutes under their belts.

Wellington picked up more in the second half and started to play in small patches, scoring the equaliser through Aaron Merry from the spot after Lloyd Manning won the penalty by playing the ball off a defender’s hand.

In the final 15 minutes, Wellington finally got on top but couldn’t score a winner – neither keeper was really troubled except for the two goals in this game.

The draw makes it four games unbeaten for Wellington who are away to Galmington Dragons next Saturday.

A team return to action with draw

Positives from first team’s return to action
Scroll to top