You are here: Home1 / Positives from first team’s return to action

Manager Tim Legg was able to take a number of positives from his side’s return to action yesterday despite going down to defeat away to highly-rated Clevedon Town.

Clevedon were lying fourth in the Toolstation premier when the season was curtailed because of COVID while Wellington were down in 17th place. 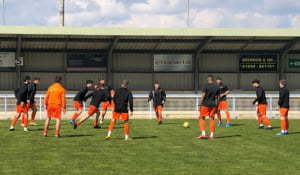 Legg was also without a string of players including both keepers – Tom Welch and Chandler Hallett – the three Quick brothers – Jake, Jason and Miles – along with Jack Lewis.

He said: “Clevedon are a decent side and, although we had lots of the ball, they created the better chances.

“It was frustrating that we couldn’t create more opportunities but it was definitely a worthwhile exercise, particularly for those players who came into the squad.”

These included Tom Creed, a keeper whose previous clubs include Hallen and Wells City, as Welch is moving away from the area and Hallett does not know if his job as a PCSO in Wellington will allow him to be fully available next season.

The squad also included young centre back Ryan Sandford, who is currently at Exeter University, and Legg was delighted to welcome back central defender Jordan Casey for his first game after a lengthy layoff with a knee injury.

The manager added: “It was our first game since Boxing Day and not surprisingly the lads looked rusty against a decent outfit.”

Clevedon started brightly and went ahead after eight minutes as George King found Will Gould whose shot bobbled up over Creed and into the net.

The home side continued to create the better chances although after 26 minutes Jack Bown-Porter found Paolo Borges, who was crowded out by defenders.

Both sides made changes in the second half and sub Rohan Poulsom ran on to a long ball from Tom Davies but home keeper Harley Wilkinson rushed out to clear.

Clevedon continued to create chances with Creed pulling off a number of saves and they scored their third with five minutes remaining as Callum Gould’s free-kick into the box was headed down by Glen Hayer to Ethan Feltham whose overhead kick ended up in the back of the net.

Next up for the first team is a trip to Exeter on Wednesday to take on Exwick Villa followed by another friendly at Elmore on Friday.

Another draw for A team in COVID Cup

Our Ladies are also back in action
Scroll to top