You are here: Home1 / Poulsom hits hat-trick in cup victory

Our A team went into this game with three changes – captain Oli Ghazala and top goalscorer Jordan Sellick had to sit out out through injury and Mitch Hanson due to work commitments. Into the squad came Liam Thorne, Brad Holmans and Rohan Poulsom.

Welly started shakily in the blazing sun and conceded within the first 15 minutes to go 1-0 down. This woke us up and we started to get the ball down a play a bit more, drawing level as Thomas Scarlett ran through on goal, lobbed the keeper and smashed the ball in from one yard. 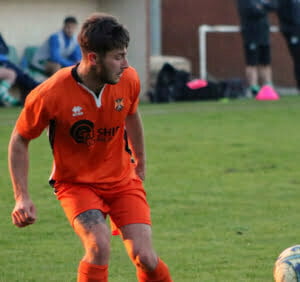 The rest of the first half was mainly Welly but neither side created any more opportunities except for a Connor Noble bullet header being chalked off for offside.

Just like the other two COVID Cup games, Welly made five changes at the break to give everyone a run out.

In the second half, Welly took the game to Galmington and the ever-improving Poulsom (pictured) bagged a couple of very good goals through some decent team play to make it 3-1.

Galmington continued to nibble away and pulled a goal back to make it 3-2 with some clever play on their right hand side.

As the goal went in Holmans exclaimed “we will just have to score again” and with that from kick off Welly worked the ball forward and Poulsom blasted home to complete his second half hat trick after coming on at half-time.

So Welly are now five games unbeaten and look ahead to their league cup quarter-final pn Friday night against a tough Stogursey side.

Under 11s thank kit sponsors for support
Scroll to top