New look to the Western League

You are here: Home1 / New look to the Western League 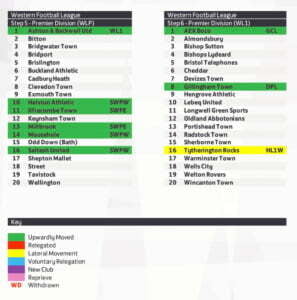 We’ll be playing in a new-look Toolstation Western League premier division next season.

The FA’s reshuffle of Steps 3-6 across the country means we have lost seven teams and gained six – going down from 21 to 20 clubs.

That fails to tell the whole story, however, as the moves mean a major geographical shift back further down into the South West.

Although social media has been alive with comments on the introduction of more teams from Cornwall, let’s not forget that – when we first entered the Western League in the 1970s – trips into the Duchy were taken as read, along with a plethora of opponents in Devon.

Indeed, Wellington was considered a geographical central point for the league at that time, to the extent that they even considered staging the final of Les Phillips Cup at the Playing Field.

We’ve now lost some easy hops up the M5 and gained some incredibly long journeys for a club playing at our level.

But let’s look on the positive side of the changes … it will be great to visit a number of new grounds and re-visit a few old adversaries.

Some will remember playing Saltash after our first promotion to the premier, under Sammy Kingdom, in the early 80s – they were always tough opposition and we can expect more of the same next season.

As for Ilfracombe … well the departure of our manager Dave Sheehan to the North Devon club, followed by a host of players, meant that games against them were often feisty affairs. But the people down there are always a friendly bunch, as proved during our visit in pre-season last year.

Finally, a happy memory of Backwell (now Ashton and Backwell) is a thumping win there, which helped us to a second promotion, this time under Leigh Robinson, in 2007-08.

The other incoming clubs – Mousehole, Helston and Millbrook, all in Cornwall – will be new territory for us and we are looking forward to visiting them.

Roll on next season!

A team win their COVID Cup final
Scroll to top