You are here: Home1 / A team win their COVID Cup final

Our A team came out of top as they met Staplegrove again in another big cup game, this time in the final of the league’s COVID Cup.

Last season these two sides met in a semi-final in which Welly deservedly progressed after a fantastic display. 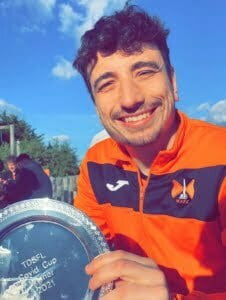 The game on Castle School’s Astro kicked off and, after a fairly even start with both teams playing some good football, Welly took the lead through Thomas Scarlett (pictured) after some nice link-up play.

The rest of the half saw Staplegrove take control, hitting the post and crossbar in the process, although just before half-time Welly counter-attacked and were awarded a penalty. Although his shot was on target, Scarlett’s penalty was saved.

The second half started in similar fashion to the first with both teams creating a couple of half-chances.

Staplegrove started to move up a couple of gears so the Wellington management took the brave decision to tweak the side slightly, leaving just Aaron Merry up front chasing down everything that came in his direction.

A few half-chances fell Staplegrove’s way but big Rob Hall in goal dominated his box well and the back five stood strong.

There was a big penalty claim with five minutes remaining for Grove was turned away by the referee and, shortly afterwards, the full time whistle went to the delight of the Welly boys.

Staplegrove were very unlucky in a game in they dominated for large periods but Welly held tight as a team and worked hard off the ball to see themselves across the line.

That’s now two trophies in two seasons for the A team. 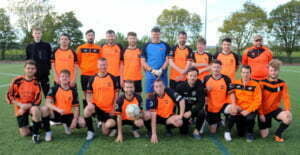 New look to the Western League

New management team for our Reserves
Scroll to top