Wellington extended their unbeaten run to three matches with a Bank Holiday draw at Clevedon Town.

But they will be kicking themselves that they didn’t make it a hat-trick of wins after building up an early 2-0 lead only to be pegged back after the break.

Manager Tim Legg made one change from the starting 11 which won 2-0 at Street the previous Friday with young Shay Allen coming in between the sticks for Connor Sidley-Adams. 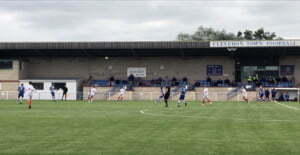 And they got off to a flying start, taking the lead after only ten minutes. Miles Quick’s low drive from a free-kick 25 yards out was half-blocked by the defensive wall but the ball broke to his brother Jake who took full advantage to shoot home.

Five minutes later it was 2-0 from a goal of real quality as the Quick brothers combined again. Wellington moved the ball quickly out of defence, Josh Baker played it inside to Miles Quick and his diagonal ball over the top played in Jake Quick to coolly lob his second of the game.

The visitors held their lead into the break and nearly increased the deficit early in the second half as midfielder Sam Towler, who has impressed since re-joining the club from Bridgwater, lifted his close-range effort straight at keeper Harley Wilkinson.

That might have put the result beyond doubt but Clevedon stepped up a gear and were able to get back on level terms with more than a little help from some poor Wellington defending.

They pulled a goal back after 53 minutes when a low cross from the right found Syd Camper in plenty of space to drive home.

And the home side equalised in the 69th minute as more hesitant defending led to Archie Ferris poking home a cross from the right.

It wasn’t all one-way traffic in the second half though. Wellington felt they should have had a penalty when Jake Quick appeared to be hauled down while sub Rohan Poulsom headed over from a good position late on.

At the other end, Allen acquitted himself well in goal with a couple of smart saves.

Friday night win makes it two on the bounce

Beaten but not disgraced as run is ended
Scroll to top