Beaten but not disgraced as run is ended

You are here: Home1 / Beaten but not disgraced as run is ended

Wellington’s three-match unbeaten run was ended with defeat away to second-placed Tavistock. 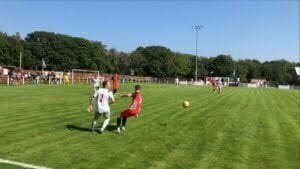 But they could hold their heads high after a gutsy performance against a side tipped by many to be there or thereabouts at the end of the season.

Manager Tim Legg was forced into three changes from the side which had done so well recently with the absence of midfielders Glen Wright and Miles Quick along with defender Jack Bown-Porter.

He brought in vastly experienced defender Kevin Nicholson while there was a first start of the season for Mason Raymond after his hamstring injury and a return for Jamie Vaughan-Ryall.

Nicholson, who is Head of Coaching at Exeter City, belied his 40 years with an assured performance in defence, displaying all the experience gained from a professional career with the likes of Sheffield Wednesday and Torquay United.

On a glorious afternoon in Devon, the opening was cat and mouse before Tavistock took the lead after 15 minutes. A weaving run into the Wellington defence led to the ball being played to Tallan Burns, who thumped home a low drive.

Although the home side went close on a couple of occasions, the visitors nearly equalised midway through the half as Sam Towler fired just wide.

Wellington were not to be denied and drew level eight minutes into the second half. A clever ball over the top by Jake Quick played in Josh Baker and the youngster showed great composure under pressure to advance on goal before beating keeper Josh Oak.

Ironically, Baker had been suffering from an injury and limped off immediately after scoring to be replaced by another home-grown youngster, Rohan Poulsom. 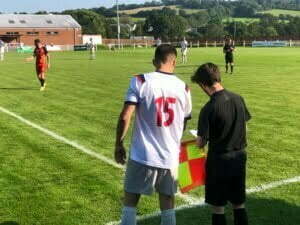 Towler saw a long-range dipper turned over by Oak before Tavistock put the issue beyond doubt in the dying minutes when Liam Prynn scored from close range.

Wellington used both of their other subs including a rare run-out for Legg for the final 17 minutes.

But they saved the best until last as popular midfielder Harry Walford came on for the closing stages – his first appearance since suffering a badly broken leg at Hallen nearly a year ago. Welcome back, Harry!