Much-changed Wellington suffered a disappointing odd-goal defeat in a mid-table premier clash at the Playing Field. 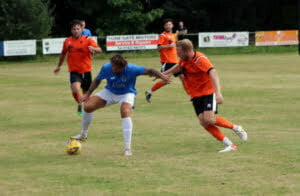 Manager Tim Legg was missing four of the starting 11 who had taken leaders Bitton to the wire the previous week but they will still be kicking themselves for coming away empty handed.

The changes also saw skipper Glen Wright dropping back from midfield into the centre of defence and yet, ironically, it was the skipper who broke the deadlock after 27 minutes.

A corner from the right dropped to him at the far post and he hooked the ball into the roof of the net.

Wellington had three chances to increase their lead before the break including Davies seeing a goalbound header hooked off the line.

But Brislington squared things up after 37 minutes when a corner was headed out to Keiron Proctor who rifled a rocket past keeper Shay Allen.

Wellington almost restored their lead shortly after the restart but Sam Towler’s dipping shot thumped against the top of the bar.

And they went on to miss a number of chances with the Brislington keeper also pulling off a couple of excellent saves.

Wellington were made to pay five minutes from time when the visitors broke out to net the winner. Jordan Scadding was sent racing clear and made no mistake.

There was still time for the home side to go close to the equaliser their efforts more than deserved.

Sub Luke Perry sent over a cross to the far post and Baker dived in but his header came back off the upright.

Ladies pipped on their travels
Scroll to top