A pair of top-drawer finishes sent Wellington on their way to a home defeat by in-form Bridgwater United in their local derby at the Playing Field. 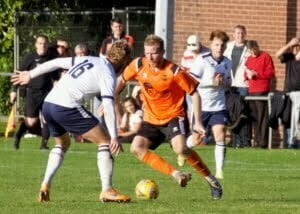 And although a twice-taken penalty in injury time produced a scoreline which flattered the visitors, Tim Legg’s side could have no complaints at the result as they failed to build on an encouraging first half performance.

Wellington were dealt a blow ahead of the game with skipper Glen Wright struck down by illness which meant he was only able to take a place on the bench.

Yet they matched the ambitious visitors in a cat-and-mouse first half which ended goalless. 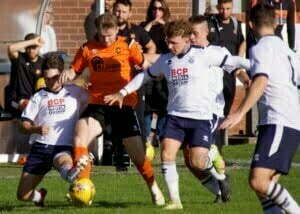 However, it was a one-sided affair after the break with Bridgwater showing their quality with goals after 56 and 65 minutes.

They broke the deadlock as the ball was played forward and, when it was laid off to George King, he drilled in a shot from distance to give Allen no chance.

But the best was yet to come nine minutes later. Midfielder Tom Llewellyn collected the ball just inside his own half and, spotting Allen off his line, sent the ball sailing over the keeper’s head.

That took the wind out of Wellington’s sails, although Towler saw a goalbound shot blocked in the dying minutes before Bridgwater had the final say.

Former Wellington striker Taylor was sent tumbling in the box and, although his spot kick came back off the inside of the post, the referee ordered it to be retaken and Taylor made no mistake at the second attempt.

Jason is honoured by county FA