You are here: Home1 / Home win moves Ladies into third

After two postponed games, our Ladies returned to action at home to Combe St Nicholas in their new home kit in partnership with their sponsor, C&C Carpets, Curtains, Beds and Blinds. 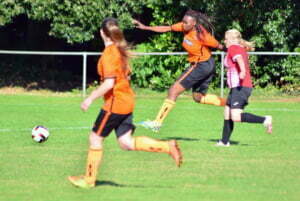 With three weeks away from football, the Ladies were keen to get their form back after a close defeat in their previous game against Ash Rangers.

Wellington started the afternoon with a 4-4-2 setup, a first for this season, and this ‘back to basics’ approach worked well.

Player-of-the-Match Kenzie Norman managed to grab her first senior goal early on with Tash Hole and Lauren Smith both getting their names on the scoresheet in the first half.

With a comfortable three-goal lead at half-time, Wellington switched over to their recently-adopted three-at-the-back approach they have been working on throughout the season and this is where fatigue began to show.

Lack of coverage at the back allowed Combe St Nicholas to open up and slot home one of the few chances they created, proving that they can be clinical where required.

Wellington kept the pressure high until the end and Lauren scored yet another outside of the box finish for her second of the match, putting the game to bed.

Lauren and Tash now join Amy Sharkey as the team’s top scorers for this campaign and, after a solid performance, Wellington and move to third in the league, two points behind Ash Rangers and Bishops Lydeard who both sit at the top with nine points.

Wellington are now looking forward to their forthcoming match away to Pen Mill Reserves on October 31st.