You are here: Home1 / Gritty display earns away draw

Wellington bounced back from their midweek defeat at Bridgwater with a gritty performance to earn a point away to Shepton Mallet. 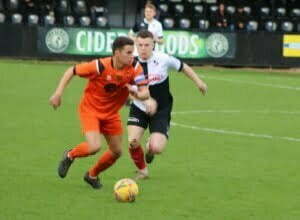 Manager Tim Legg was again without a string of key players with skipper Glen Wright still suspended, midfielders Miles Quick and Sam Towler ruled out by injury and defenders Jack Bown-Porter and Tom Stone only fit enough for the bench.

The re-shuffled line-up included a place in midfield for Harry Walford (pictured) – his first start since suffering a broken leg at Hallen more than a year earlier.

Legg marked the popular player’s return by making him captain and Walford responded with an outstanding display in what was a much-improved team performance.

Playing down the steep Shepton slope in the first half, Wellington produced some slick football against a home side, who have faltered since making an excellent start to the season.

The visitors went ahead after 14 minutes when Jason Quick floated in a free-kick from the right which dropped in the area to be turned home by his brother Jake.

Shepton should have drawn level midway through the half but Joe Morgan lifted the ball over the bar when unmarked at the far post and they also saw a cross deflected on to the inside of the post and out early in the second half.

Wellington had a good chance to double their advantage just after the hour mark, Jake Quick bursting clear only to be foiled by onrushing keeper Tom Easterbrook.

Shepton recovered from that let-off with a 65th-minute equaliser, Jack Fillingham driving home a low shot off the inside of the far post.

Both sides went in search of the winner with Wellington keeper Shay Allen pulling off a couple of excellent saves and Bown-Porter seeing a goalbound shot blocked at the other end but it finished all-square.

Picture gallery below … click on the first image and scroll through.

Mr T takes over the A team!

Proud to support the Play Safe campaign
Scroll to top