You are here: Home1 / Permanent reminder of club stalwart

A lasting reminder of one of our club stalwarts has been installed at the Playing Field. 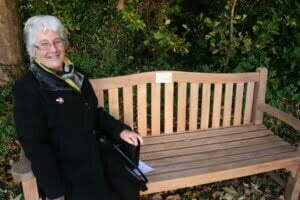 The bench in memory of Neil Jenkins has been provided by his wife Shirley.

Neil, who passed away in 2019, gave more than 50 years of devoted service to Wellington AFC, firstly as a player and then as a committee member, helping out in many ways including five years as Membership Secretary and countless stints of voluntary bar work.

In 2016, his work was formally recognised with the presentation of a special award from the Toolstation Western League (photo below).

Shirley said: “I wanted to do something to remember Neil at a place which meant so much to him.

“I’d like to thank everyone who helped with the installation of the bench.”

Our chairman Mike Hall said: “”This is a lovely gesture by Shirley and is most appreciated.

“Neil was an incredibly popular figure at the club and we all miss him so it’s great to have a permanent reminder of such a great character.”

Another England call-up for Brooke
Scroll to top