Another England call-up for Brooke

You are here: Home1 / Another England call-up for Brooke

Congratulations to Brooke Aspin, who has been selected for the England Women’s Professional Development Phase Tournament Squad to attend the Algarve Tournament. 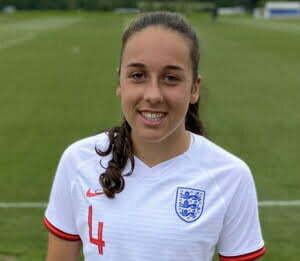 Brooke, 16, already plays for England Under 17s and Bristol City Women in the FA Championship.

She plays for Bristol City at Watford on Sunday and will then head across London to link up with the rest of the squad.

England will play Norway and the Netherlands on Wednesday and the following Monday.

Brooke currently starts every league match at the moment including last Sunday’s 3-0 over Blackburn before a crowd of 3,053 – a club record for a women’s match – at Ashton Gate.

City are also top of their Continental Cup group, having beaten Lewes 3-1 on Wednesday.

Meanwhile, the draw for the U17s European Championships takes place on December 9th and Brooke will be hoping to be representing her country in her own age group to help England reach the final in Bosnia next summer.

Brooke is a member of a well-known footballing family in Wellington including her uncle Tim Legg who is our first-team manager.