Wellington made it through to the third round of the Vase – and collected a further £900 in prizemoney – with a five-goal salvo at the Playing Field. 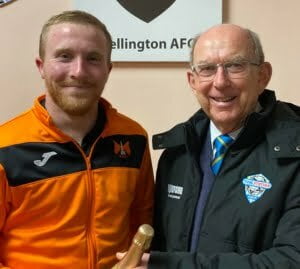 But they had to recover from a first-half wobble before dispatching the visitors who are struggling in the Wessex League this season.

Manager Tim Legg made two changes from the side which had drawn 1-1 at Shepton Mallet, Miles Quick coming in for the cup-tied Douglas Camilo and Theo Simpson, a new signing from Tiverton Town, replacing the unavailable Jake Quick.

Wellington got off to a flying start by going ahead after only nine minutes. Man-of-the-match Jason Quick played a superb cross-field path to Scott Merritt and his low cross was clinically dispatched by Josh Baker.

The Christchurch response was immediate as the home defence failed to clear their lines and Finn Lowe hooked the ball home.

And it got even better for them midway through the first half when they were awarded a free kick 20 yards out and James King gave keeper Shay Allen no chance.

That was the signal for Simpson to step into the spotlight. He made it 2-2 just after the half-hour with an accurately placed shot and then restored Wellington’s lead just before the break with a cracking individual effort.

Five minutes into the second half Simpson completed his hat-trick from the penalty spot when Jason Quick was brought down after rounding the keeper and Wellington had one foot in the third round with a 4-2 lead.

That goal seemed to take the wind out of the Christchurch sails but the home side were unable to add to their advantage until injury-time when Josh Champion finished off a slick passing move for number five.

Another England call-up for Brooke