You are here: Home1 / Goalless draw ends run of defeats

Wellington returned to action after an absence of nearly a month with a goalless draw against Street at the Playing Field. 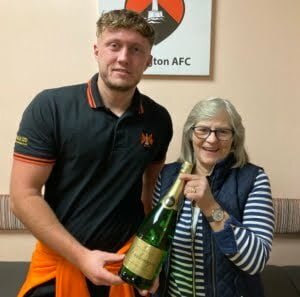 It ended a run of three defeats – two in the league and one in the Vase – but that was one of the few positives to draw from a frustrating afternoon.

Both sides looked naturally rusty after such a long break without a game because of cancellations caused by either waterlogged pitches or Covid.

As a result, it was a poor contest with goalmouth action at a premium as the teams cancelled each other out.

Wellington, looking to complete the double over Street, enjoyed more possession in the first half but it was the visitors who came closest to breaking the deadlock after 23 minutes as keeper Shay Allen pulled off a superb double save.

The youngster flung himself to keep out Alesandro Costanza’s drive and, when the ball came out to Harry Foster, he got up quickly to foil the rebound effort.

It was a similar story after the break with Allen doing well to keep out a Bradley Shepard free kick shortly after the re-start.

Wellington created a couple of half-chances with man-on-the-match Tom Stone heading wide from a corner and Sam Towler being denied by keeper Liam Norris.

The home side threw men forward in an effort to score the winner but it was to no avail.

Manager reflects on first half of season

Great to be back says manager
Scroll to top