You are here: Home1 / Unbeaten home run is ended

Wellington’s four-game unbeaten home run was ended at the hands of Buckland Athletic at the Playing Field.

It completed a hat-trick of victories for the Newton Abbot club who had already beaten Tim Legg’s side at their place in the league and FA Vase. 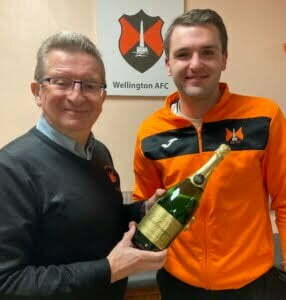 Legg was able to welcome back a number of players to the matchday squad including the three Quick brothers and keeper Shay Allen, returning after a one-game suspension.

But they could not build on a promising opening to the game and lacked a cutting edge throughout a game of few chances.

Wellington had appeals for a penalty turned down after seven minutes when Josh Baker looked to have been pushed over in the box.

And Buckland went ahead nine minutes later with a quality finish. Rhys Fuller sent over a cross from the right and Josh Webber gave Allen no chance with a flying header into the top corner.

It stayed at 1-0 until the break and the visitors took the game to Wellington in the second half, allowing the home side little time to settle on the ball.

They doubled their advantage after 66 minutes with another piece of clinical finishing. Striker Ryan Bush got in behind the defence and clipped the ball over Allen before nodding it into the net.

Wellington again felt they should have been awarded a penalty midway through the half when Baker was scythed to the ground in the box but the referee turned down their appeals for the second time.

Photo: Defender Mark Cornish was named man-of-the-match and received the award from Ken Bird, our website and social media officer.

Football for boys and girls aged 3-8